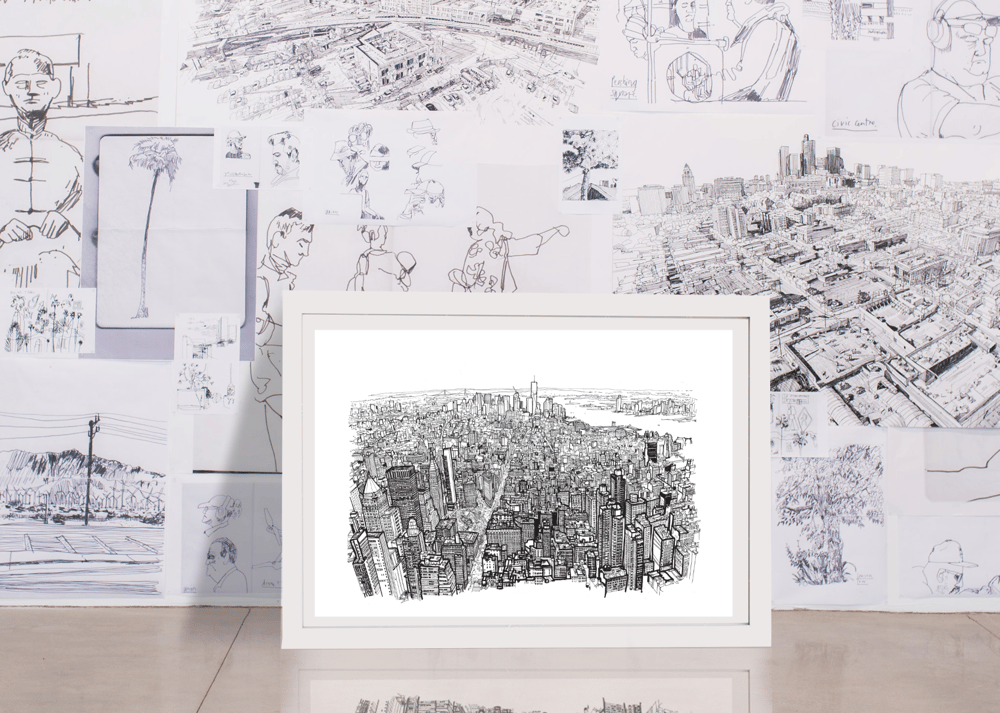 I made this drawing of Manhattan in 2012 after spending a few hours sketching and researching on location. I captured the resulting large drawing in a time-lapse film which showed the process over a week. This film ended up going "viral" on the internet and i received press all over the world.

This drawing is available to buy as a silk-screen print, which measures 100cm x 70cm and is an edition of 175. Each print will be signed and numbered and have the title "Empire State of Pen" written centrally across the bottom edge.

Some press for Empire State of Pen

"The skyline of New York City is filled with so much detail, character and history, that taking it all in is quite the challenge.Drawing it is another story, however. Hence our dropped jaws in the face of Patrick Vale's timelapse video"
Huffington Post

“This is one alien in New York who will certainly be welcomed back. London based artist Patrick Vale has become an internet sensation after posting a stunning time-lapse video shot as he sketched the Manhattan skyline from the top of the Empire State Building.”
Daily Mail

“After marveling at the final illustration at the end of the time-lapse clip, we were hooked and wanted to see more of Vale!”
Architecture Daily

“it’s staggering to watch his work take shape before your eyes. Even condensing this feat into 80 seconds doesn’t detract from the ridiculous level of skill involved – in fact it heightens your appreciation of the scale of this undertaking. Well done Patrick sir!”
it's nice that

“Vale’s “Empire” is an act of bravura, and as such, it’s exceedingly enjoyable to watch him map out the geography that unfolds south of the Empire State Building. In keeping with Vale’s other work, the line work is willfully scraggly, imperfect without being whimsical or cute.”
Architizer